As my last post indicates, I had a really hard, really weird couple of weeks.  So many things came at me at once.  So many answers were demanded of me, and I had so many questions.  It was at home and at work, and those two weeks left me stupefied, and a little crazy and numb.  I don’t really remember all the things I did at my level of stupefaction.  Probably said something stupid.

If you can’t imagine my frame of mind, scribble on a piece of paper.  Yeah, that was pretty much it.  Maybe, Dublin captured it best in this photo.  This is kinda what I looked like for the last two weeks. 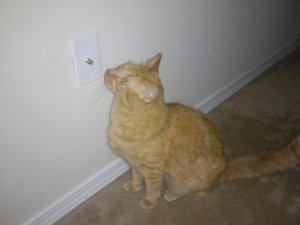 Now I’m still young, when the pressure to figure things out is at an all time high, or at least I perceive it to be, so I’m owed a little crazy.  I’m also old enough to learn something from these periods, of ” WTH?!?”

I’m not much of a drama queen.  I don’t like drama, I like excitement.  Please don’t confuse the two.  I’m an excitement queen.  I run on possibilities and caffeine.  If I’m bored, I’m miserable.  (And more likely to text you.)  So, when pressure and bad news are at all time high, and possibilities of excitement, adventure and happiness are low…and all this news comes at once, culminating in one weekend… I moan and I run in circles.  Phew, so tired.  You know, from the running…

So what did I learn from the running and the crazy?  A sparrow in the airport that landed at my feet was the first reminder.  Things might be falling around me, and the path ahead completely unclear, but there is a path, and there is a Guide.

Another reminder.  This morning, I met a man whose young daughter was diagnosed with type 1 diabetes just days ago.  She is still in the hospital.  His world turned upside down and a flood of new information and new emotions hit him.  He looked shocked, he looked confused, and in his eyes I saw grief and resolve.  In a day, just like any other, his world and that of his family’s forever changed.  His world was confusing, but I had knowledge.  I had knowledge of an incredible life his family had waiting for him and friends waiting to meet him.  I hope he uses me, and our resources in the time that he is shocked, confused and heartbroken.  Because where he cannot see past her getting out of the hospital, we can see her playing and laughing with friends.  This meeting gave me perspective.

Reminder three.  My appointment with my new epileptologist.  I had never been given a real diagnosis.  I was told I had epilepsy and ever since then, it was figuring out how to control it, the end.  I knew of people who had grown out of their epilepsy, and thought, in the back of my mind, that my condition could be temporary.  I have a type of epilepsy that does not go away, and was told that I would be dependent on medication for the rest of my life, with the threat of seizures.  It could happen, but statistically, I should not even consider it.  I could try tapering off my meds if going seizure free for two to five years (I’m in year three), but seizures are so terrifying to me that the thought of turning myself into an experiment that can’t drive, work or be left alone is not really an option for me.  This news was not disheartening for me, but I knew it would be somewhat of a let down for those who had been through this with me.  Looking at me, you can’t tell I have epilepsy.  I  haven’t had a seizure in three years, and you know what?   I might not have another one.  That’s an amazing blessing, and I cannot take it for granted.  Last weekend, I saw a young woman walking around with a helmet.  At this appointment, I saw patients with noticeable neurological disabilities – they could not walk, they could not speak.  I went to my appointment with my best friend, my rock.   He cares so deeply for me, and although the path ahead will not be free of epilepsy, I have so many blessings now.  In the midst of the crazy and heartbreak, I even have the blessing to see past it, to see the reminders.  The couple with serious health issues had each other, and in the gentle care they gave to each other, I could see that they could tell what a blessing they were given in each other.

I can get some really awful news tomorrow.  My dreams could become dust.  But in that dust come new dreams and new opportunities.  Taking hold of today, and finding the great in tomorrow.